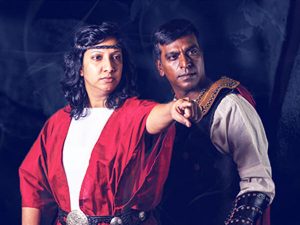 The book of Judges is a series of cycles. The people rebel, they face retribution as God removes His protection, they find their way to repentance, and God rescues them – and then the cycle repeats itself, again and again.

When we step into the story in chapter 4 of Judges, Israel is in rebellion against God. The Lord has removed His protection and allowed the people of Israel to fall under the oppression of Jabin, the King of Canaan. He had a mighty army, led by Sisera, and equipped with 900 chariots – the equivalent of tanks in our time. Israel had none of these things – no king, no real army, no chariots. There was no way for Israel to overcome its dominance.

We’re quickly introduced to Deborah. She was a prophetess (one who is divinely inspired by God to speak truth) and a judge. As the judge for her tribe, it was Deborah to whom people came for direction and judgment. Some would say Deborah only rose to authority because no man was willing to lead, but that doesn’t fit with what we know about people, then or now. When God raised Deborah to a place of authority, she became one of the best leaders in the history of Israel.

Much Like Golda Meir is considered the Mother of Modern Day Israel, Deborah is known as the Mother of Old Testament Israel. What lessons on godliness and leadership can we learn from God’s decision to turn societal norms upside down when He called Deborah to lead His people?

Deborah summoned a man named Barack, who the Lord had called to confront Sisera. The Lord had promised to draw out Sisera and give him over to Barack. This didn’t seem possible given the strength of Sisera’s army. Deborah reminded Barack of this word from the Lord. Barack was not eager to go, and only agreed to go if Deborah would go with him. Barack wasn’t demonstrating tremendous resolve or faith in the Lord’s promise. And he wasn’t acting as a leader.  Deborah submitted to Barack’s request and agreeing to go because sometimes leadership looks like submission. Deborah pointed out that because she went, Sisera would fall to the hand of a woman and Barack would not get credit for the victory – that was a prophetic word.

They made their way, with Deborah reminding him with each step that it was the Lord leading them into this battle and the Lord who would supply the victory, which He did. And He did so in miraculous and supernatural ways.

After the victory, Deborah offered a song of thanksgiving and victory to God. Her song gave the glory to God and shared the leadership role in the victory with Barack – even though she had to push him to answer the Lord’s call each step of the way.

Throughout their journey, Deborah demonstrated the qualities of a leader. She was submissive – mutual submission, or teamwork, is essential to leadership and success.

She showed herself to have a servant’s heart and mind. She was faithful to the tasks she was given. She was in a small tribe, and she was faithful in that small arena, rather than striving for a larger platform. That’s leadership.

Deborah embraced the pain. She didn’t hesitate when she was called to go with Barack to the battle. Leaders embrace pain for the sake of others and for the sake of the call.

Deborah was always learning. She continued to seek a deeper understanding of God. She was a woman of conviction – she did not hesitate to take action when God spoke. She was not afraid to do what the Lord commanded – even when it was hard – to free her people from oppression.

She was a woman who demonstrated self-control. At many times she could have chastised others for their fear, or faithlessness, or disobedience. She could have criticized Barack, but instead, she simply agreed to go with him.

She was a woman who blessed generously, sharing credit with Barack and giving thanks to God after the victory.

And she sought the Kingdom of God. She considered what was best for the Kingdom first, for the people she was called to lead second, and for herself third. That’s not popular and it wasn’t any more common in Deborah’s day than it is now. But that’s what she did. And that’s what leadership looks like.

Are you a Deborah? Do you walk with the Lord, submitting to Him and His will, placing Him and others before you, walking boldly in His leading even when there’s pain involved, sharing credit and giving thanks? You’re called to be. It’s who the Lord created you to be.