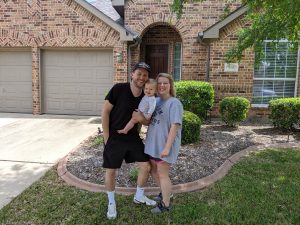 “How Deep the Father’s Love for Us.”

What could these things possibly have in common? What story, what author, could weave these together in a way that is meaningful or makes any sense at all?

To answer that question, we’ll have to travel back in time to an elementary school church camp at Lakeshore Camp and Retreat Center in Tennessee, where a young boy had that last-night-of-camp experience and came to know Jesus as his personal savior. Years later, in 2010, that young boy was a college student working as the music director at that same summer camp when God called him to ministry.

And at RockPointe, we’re thankful for the God who issued that call, and for the man who answered: our new Worship Pastor, Austin Powell.

Favorite songs are a good way to get a feel for a worship pastor’s style, both all-time favorites as well as current playlists. “All-time anything is so tough to me!” Austin said. “I think I would say ‘How Deep the Father’s Love for Us,’ or ‘In Christ Alone.’ My current favorite is probably ‘God So Loved’ by We The Kingdom.”

Austin grew up in Memphis, Tennessee, raised in the Methodist tradition. He attended college there as well, earning a Bachelor of Arts degree in Spanish from the University of Memphis in 2013, while also serving in his home church. It was there that he held his first full time ministry position.

Along the way a friend had a somewhat unusual suggestion, “I know this girl you should sing with,” the friend told Austin.

“We were living in different cities at the time,” Austin explained. “So we recorded a side-by-side YouTube video together.”

The other side of the “we” Austin mentions in that side-by-side video was Leah.

“It sparked a friendship,” Austin continued. “We began dating in 2013. This month, we’ll celebrate 5 years of marriage.” 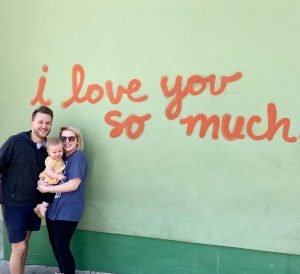 In 2016, Austin and Leah moved from Tennessee to Austin, Texas, to accept the call to Austin’s first pastorate, where they served for three and a half years. “Then God called us to RockPointe through a mutual friend of mine and Matt’s who was assisting in the search process,” Austin said. “We are so thankful that God brought us to RPC!”

At RockPointe, we’re thankful too — thankful that a man who began talking with RPC months before coronavirus was on anyone’s radar was willing to accept a call and move his family in the middle of it. That’s not an easy move. In May of 2019 Austin and Leah welcomed their daughter, Ellie, to their family, so the move included their young family of three as well as their two dogs. And it meant finding and buying a home sight unseen – that’s a lot of trust in God’s faithfulness and a realtor’s expertise! It’s not something everyone would be willing to do.

A move like that would require a strong foundation of trust in God, which is the thing upon which the Powells built their family. It began with the truths learned in Austin’s Methodist background and Leah’s Presbyterian upbringing. Another layer of spiritual development was added through Austin’s education at Southwestern Baptist Theological Seminary where he recently earned his Master of Theological Studies degree. These components all came together to create the solid foundation on which the Powells live and from which Austin will lead RPC’s worship ministry. “RockPointe is a gospel powerhouse,” Austin said. “We are so excited to be here and contribute to the Kingdom impact that is already in place.”

In spite of the unusual circumstances of the mid-quarantine move, it is exciting to be in the center of God’s will. There are, though, a few creature comforts that make a place feel like home. Austin and Leah have some favorites. “Tacos, mostly!” Austin said. “In all seriousness, we hope to unpack and settle into our home fast, find community quickly, and dive into local restaurants and find favorites.” he explained. 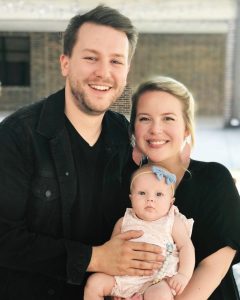 “New everything can always be scary,” Austin said. ”New city, new home, new church, etc. But we know God will give us everything we need to accomplish his purposes in and through us.”

The same God who writes a story in which tacos, a home purchased sight unseen, and a good rendition of How Deep the Father’s Love for Us are all integral parts will indeed provide exceedingly, abundantly more than we could ever ask or imagine, according to His power. Interestingly enough, that comes straight from Ephesians 3, which happens to be Austin’s favorite chapter of scripture because, as Austin says, “It’s so rich. It reminds me of eternal purpose and the greatness, goodness, and grace of God.”