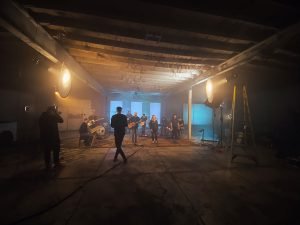 Oh praise the name of the Lord our God,
Oh Praise His name forevermore.
For endless days I will sing your praise
Oh Lord, oh Lord our God.

According to the authors, Hillsong Worship, this song almost never existed. Portions of a single verse and melody ended up in their “may not finish” basket after they struggled to craft a song conveying the message of the Gospel while acknowledging the timelessness of the hymns that came before it. But when tasked with writing a new song for Easter 2015, Hillsong writers revisited their unfinished work and this time, the words flowed to paper much more freely.

So how did it go from “may not finish” to widely known? Specifically, how did it become our RPC anthem for Easter 2020?

“We know the world doesn’t need another really cool music video,” RPC Worship Arts Pastor Austin Crosby said. “What the world needs – at Easter and every day – is the Gospel.”

An annual Easter music video has become part of the RPC calendar, but no one on the Creative Team or the Worship Team wants to produce something just for the sake of checking off a box. The song choice – whether to cover a known song, introduce a new cover to RPC, or write something original – is an important first step in determining if the video will happen each year.

“This song has been one of my favorites for a long time,” RPC Worship Director Matt Byrd said. “It portrays the whole gospel: God’s redeeming love, the hope of the resurrection, and the new life Jesus brings.” Knowing they wanted first and foremost to share the gospel and make much of Jesus, the team decided this song was the right one for this time and place.

While the song choice was clear early on, there were more details to iron out. “I knew this was the last video I would do with RPC,” Byrd said. “So I really wanted to use our own people and do something that would share the gospel, but also would be special to the worship team – the people who are able to be part of the production of it.”

It hasn’t always been RPC’s own people in the video. In previous years, hired musicians have supplemented the team to deliver the end product. “It’s a testimony to what RPC Worship has grown into under Matt’s leadership,” Crosby explained. “In the past we needed to hire musicians, but this time our own people were able to bring the same quality and excellence we would have paid for.” 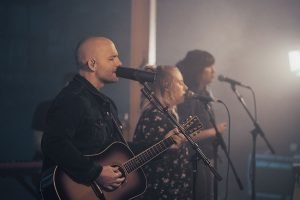 Byrd was quick to deflect that affirmation. “It’s a testimony to the faithfulness of our team,” Byrd interjected. “Our volunteer musicians, and Austin, and Cam did a lot to make this happen. It’s really the heart of our people who love the Lord and have honed their gift to honor Him, and God blessed that.”

One of those people is Joe DeProspero, bass player, and an integral part of RPC Worship. Joe hadn’t had the chance to record in a studio before. “It was very exciting on a personal level,” DeProspero said. “It was great to do a Christian song in an environment that was not necessarily Christian, and I hope it had a positive impact on the workers.” That’s the heart of our RPC Worship team – not afraid to soak up the joy of a fun new experience, but quick to use that experience for the glory of God and the benefit of others. The team in the video (and playing and singing on Sundays) is a team whose goal is always to bring us to a place of worship, not entertainment. “I hope this video is God honoring and a unique blessing to our congregation and others in this time of live streaming,” DeProspero explained.

In recent years Dillon Chase has become something of an honorary member of our RPC Worship team, providing spoken word for worship services and special events, so there was an idea to consider including him as well.

“So I called him,” Crosby said, “And told him what we were thinking, and he said, ‘Yeah, I’ve already got a piece written to insert into that song,’ so we felt like this was just coming together in a really cool way that was going to showcase the Gospel and reach a lot of different people.” 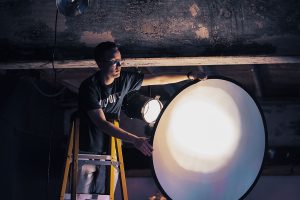 The decision was made to head up to Denton to Panhandle House to capture the music video during a studio session. To give it a live feel they used the same people who were scheduled for the Easter worship team (COVID-19 ultimately caused the actual Easter worship crew to be pared down). They also went for a one-camera, one-take approach so it could be seamlessly inserted into the Easter service, while also sent out on the website and social media, letting the music communicate in a way that sometimes no other words can.

“From the beginning of the project, the presence of God was evident in bringing this group together,” RPC Worship Team Member Cale Young said. Cale played the dulcimer in this video. “I believe God gave us the gift of music for the purpose of lifting up His Name and drawing our attention to His presence. There’s something about when the people of God are called by God using the gifts of God for the purposes of God that gives you a glimpse of the Kingdom that is to come.”

Looking back, this video – like the song itself – almost never happened, but no one knew it at the time. The video was captured just days before schools began to announce closures and churches moved to online services to mitigate the spread of COVID-19. Had the session not happened when it did, there wouldn’t have been another chance to capture the video before Easter. But timing being what it was, RPC Worship was able to share the hope of Jesus with our RPC family and with all who encounter the video online.