It’s not every day that a church willingly takes on two major expansion projects at once — and even more rare for that same church to find itself unexpectedly engaged in a third at the same time! But that’s exactly what happened for RockPointe in 2020.

When you’re part of a church that exists to love God with all that we are while making more and better followers of Christ, and you focus on opportunities to receive, equip, impact, and send God’s people, all while encouraging members to believe, become, belong, and go beyond, this really shouldn’t be a surprise – it’s just RockPointe doing what we at RockPointe say we do.

For more than two years now it has been clear that the space on our Central Campus was not enough. The Worship Center is full, but not uncomfortably so, which might leave some with the impression that space isn’t an issue. A quick trip around the parking lot or a brief walk through the Children’s Ministry hallways on a Sunday morning would tell the real story. The fact is, more than two years ago we were maxed out on parking spaces and space for children. We got creative and found places for more cars and more kids, but even that wasn’t enough. 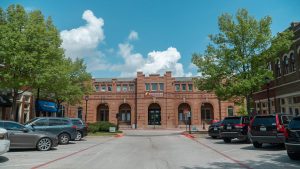 Church leadership put together an advisory committee who reviewed the situation and looked at available options, which ultimately led to the purchase of 500 Parker Square, which will allow RPC to become one church in two locations. This new space enables us to meet the needs of our existing church family while also expanding the reach of our missions and ministry to another area of our community.

Meanwhile, the Lord was working in the heart of Matt Byrd, who was then the Worship Pastor at RPC. God was calling Matt and his wife Katie to plant a church. Through a series of events that could only be explained as the hand of God, the Byrds, along with Austin and Alex Crosby from the RPC Student Ministry, are following the Lord’s leading as they plant Wellspring Church in China Spring, Texas. They are doing so as a plant of RPC, with support and assistance from our church body, staff, and elder board.

And as all of these things were in progress – all at stages from which there’s really no turning back – a global pandemic took center stage, closing churches across the nation for several weeks this spring. It would never be the heart of RPC to turn back on the steps the Lord ordained for us to take, so forward progress continued on both Parker Square and Wellspring. At the same time, our leadership recognized that moving forward on those projects wasn’t all we were called to do – we needed to also meet the needs of our church members who were unable to gather at church because of COVID-19, many of whom were in greater need of fellowship and support from their church family due to the health concerns, job changes, and financial pressures brought about by the pandemic.

RPC Online was born. RPC was never a church that placed a high priority on livestreaming our services, until that became the avenue to connecting with our people throughout the spring – including Easter! As things continue to evolve so does our online presence, but through every phase one thing that will not change is our commitment to meeting our people where they are, so online church is here to stay even as we re-open with socially-distanced options, a new midweek service, and a family-friendly worship option.

With the need to focus on creating an online presence it might seem that physical expansion would fall behind, but when God ordains something, He sees it through. Not only is Wellspring on track to launch as projected, but Parker Square is on track as well.

Permits and contracts to handle the renovation were secured in late 2019 and early 2020, and contractors began working on making this space – a gym, turned school – an extension of RPC. 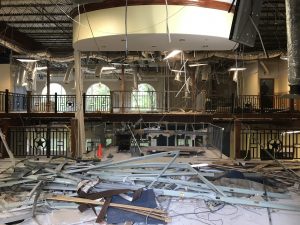 Demolition, which included removing much of the existing plumbing, wiring, HVAC, walls, ceilings, even old showers and locker rooms, was completed earlier this year.

New plumbing and new walls are in place and new electrical is in progress. The new HVAC system is also nearing completion. Windows will be replaced, new stairs are going in, millwork is coming soon, and the baptistry was recently delivered. All in all, tremendous progress has been made, with more happening every day. 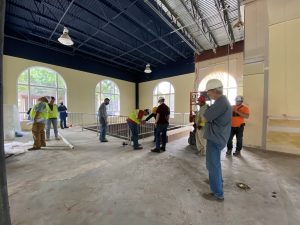 Of course, and expansion like this doesn’t happen without unexpected discoveries and precarious moments. We’ll share some of those fun behind-the-scenes stories with you over the next few weeks.

In the meantime, we want you to know that the work is on schedule for the work to begin. Wait, what does that mean?

It means that we know God didn’t ordain this Parker Square project for the sake of updating a building – He did it because He knows we will need it for upcoming Kingdom business. Lost will be found. Spiritually blind will be made to see. Kids will learn about Jesus. Families will be made whole. Marriages will be rebuilt. Jesus’ love will be made known and will be felt and received by people who have never known Him before – or who strayed from Him and are being called back into the fold.

Whether we’re on our Central Campus, online, or in Parker Square, we’re still a church that exists to love God with all that we are while making more and better followers of Christ. We’re still focused on opportunities to receive, equip, impact, and send God’s people. We continue to encourage one another to believe, become, belong and go beyond.

How will you be part of what God is calling RPC to in this new phase? Because RPC isn’t a building. RPC is us – it’s you and me. If God established RPC to love Him will all that we are, He created us for that very thing. If He intends RPC to make more and better followers of Christ, He has a role for you in that. And a role for me. If RPC is to receive, equip, impact, and send, we are the people who will do the physical, in-person work of those things.

As part of what makes up RPC you need to, we all need to, renew our focus on what we believe, what we’re called to become, where we are meant to belong, and how He is calling us to go beyond. He called RPC collectively into two three expansion projects at once. Where’s He calling you to expand yourself as this new work begins?