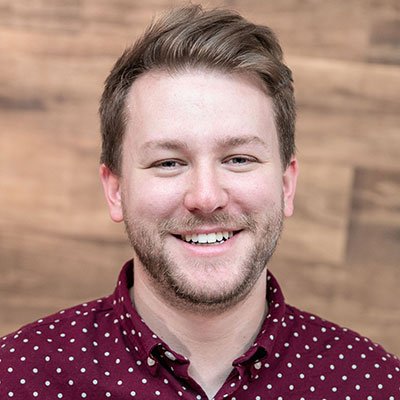 My Family:
My wife Leah and I have been married since May of 2015. We met in 2012 and were introduced by a mutual friend who said we should try singing together. The rest, for us is history! We began dating in 2013, we were engaged by the fall of 2014 and were married that next summer. A few years later, God gave us a sweet gift in May of 2019 with our sweet daughter, Ellie. They’re part of the family, too, so I’d be remiss if I left out our dogs Abbey and Penny.

My Story:
I was born in Memphis, TN! Remember the Alamo?

The summer of my fourth grade year, I accepted Jesus Christ as Savior and Lord at a summer camp in West TN called Lakeshore. I began singing and playing guitar in the youth band and that’s where I felt passion for the first time in my life. Learning God’s word and sound theology through song was one of the first ways I felt connected to God and the church. Though I was very involved, I stayed on a slow growth path until midway through my college years when I began really diving deeper into God’s word and that’s when my life really began to transform. I moved to just south of the Nashville for college and began working at that very same summer camp and that’s where I received my call to ministry in 2010.

As mentioned above, I met Leah in 2012 and once we started dating in 2013, we began an even deeper faith journey where God began refining us, as well as stances we stood on in the faith traditions we grew up in. A big part of my faith journey was moving back to Memphis and starting in ministry while still in college. Some time passed, we got married, and God began refining mine and Leah’s hearts for believer’s baptism. We were baptized in 2016, and the very next day, we received a call to my first pastorate in Austin TX.

God used our time in ATX for great purpose. I was able to hone in my giftings, develop as a young pastor, finish my Masters in Theological Studies from Southwestern Seminary, and gain formative and practical experience to equip me for RockPointe Church!

God called us to RockPointe in April of 2020 – right in the middle of the COVID-19 pandemic. What a time to trust the Lord!

Something Most People Don’t Know:
I came in the top 40 in the TN HS State Bowling Tournament in 2009…Hawaiian shirt, the whole deal.

Besides the Bible, my recommended reading would be:
Doxology and Theology – Boswell, Mere Christianity – CS Lewis

I’m most excited about:
Seeing people’s lives transformed by the Good News of Jesus!

My Favorite TV Shows:
Parks and Recreation, Survivor, The Office

In my free time I usually:
You can find me hanging out with my girls, eating tacos, cheering on the Memphis Grizzlies (NBA), The Memphis Tigers (NCAA), and The Cowboys! I also love woodworking and home projects!