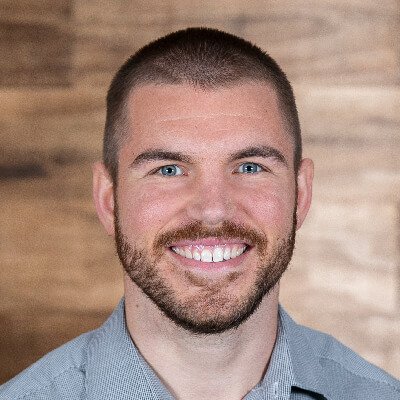 My Family:
I have been married to my wife, Johanna, since December 2016. We met at our church in Ohio, created a friendship, began dating 6 months later, and were married about 2 years after that.

My Story:
I grew up just outside Cleveland, Ohio and wasn’t raised with any kind of faith. Football was always a really big part of my life and I was able to earn a scholarship to play at the University of Toledo following high school. After college, I was fortunate enough to go on to play professionally for a couple of years with the Dallas Cowboys. This is when my life really began to shift as I realized that success was fleeting and any joy that it brought was momentary and rather unfulfilling. This led me to a place of reflection, but as a self-proclaimed atheist, I didn’t want anything to do with God and saw Christianity as a farce. However, injuries eventually led me to a chiropractor who happened to be a strong Christian. As I saw the love that he showed toward me and the others that walked into his office my view of the Christian faith began to change. Before I knew it I found myself being “discipled” by this man without even recognizing it. I was simply applying his advice and I was seeing the fruit in my life. Fortunately, I didn’t realize that this was biblical advice at the time or I probably wouldn’t have listened to him. However, over time I began to see how it was this man’s faith in Christ that allowed him to love others so well and make such a meaningful impact on my life and so many others. This caused me to reexamine my own beliefs and eventually led me to turn my life over to Christ in February of 2014. Since then, I moved from Dallas back up to Ohio where I met my wife Johanna. After getting married, we decided to move back down to Texas, allowing me to attend seminary at The King’s University and prepare for a life in ministry.

Things Most People Don’t Know:
I was actually an offensive lineman when I played football, which means that I weighed 300 pounds. I’ve dropped a few pounds since then 🙂

I’m Most Excited About:
The opportunity to share the love of Christ with those around me; for those that don’t know Him to know that there are brighter days ahead and a hope for their future.

Besides the Bible, my recommended reading would be:

In my free time, I usually:
Spend time with family and friends, read, workout, or watch football