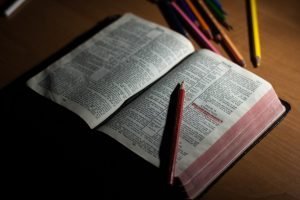 Our culture loves a good one-liner. That’s why we’re so enamored with the elevator pitch, and why we’re so quick to boil everything down to words that fit on a coffee mug or a bumper sticker. And for some things, that works well – like the line about real estate where the three most important factors are said to be location, location, location. It’s kind of funny and pretty accurate, so it works.

So what does that mean? How does one determine the context of a passage of scripture written centuries ago in faraway lands?

At the bare minimum, it’s necessary to read the verses before and after the passage in question. There’s also a simple STOP method to investigate further and get a clear view of the context.

S – historical Situation
T – Type of literature
O – Object of the text – who is it for?
P – Prescriptive or descriptive?

A clearer picture begins to emerge once the historical situation, type of literature, object of the text, and the prescriptive or descriptive nature of the text have been identified.

Take for example a verse often quoted at milestones from graduations to grand openings: Jeremiah 29:11, For I know the plans I have for you declares the Lord, a plan to prosper and not to harm you, a plan to give you a future and a hope.

If it says that God is going to prosper you, what happens when you don’t prosper?

If it says that you won’t face harm, what happens when you’re harmed?

Confusion or even “spiritual malpractice” can occur when statements are made as Biblical truth without proper context.

The Prophet Jeremiah enters the scene at a time when Israel is a divided kingdom thanks to the rule of harsh, oppressive kings – not an ideal situation, but one largely of the Israelites’ own making because of their choice to seek their own desires rather than God.

Jeremiah is given a dual purpose mission: justice and mercy. There are many warnings and cries to repent from the prophet. When the people resist, Jeremiah’s message changes and God begins to use even leaders who don’t follow Him to enact His judgment. It turns out the punishment for generations of rebellion is a 70-year timeout in Babylon under the rule of the Babylonian king.

The nation of Israel is now a nation in exile.

And it’s then, in the midst of judgment and exile, that Jeremiah pens this verse that’s often found on coffee mugs and laptop stickers. Plans, prosper, future, hope…. It’s a strange juxtaposition against this contextual backdrop of exile and oppression. Exile and oppression aren’t exactly things one would typically offer as encouragement to a graduating senior or someone aspiring to reach new heights or opportunities.

But, these words are exactly what God said, through Isaiah, to His people in exile.

Even then, there were false prophets who were preaching and promising a quick and easy way out of exile. That was a popular message as it was certainly an easier one to stomach than the message of Jeremiah. That’s human nature – we always want to believe what we perceive is in our best interest, and that perception tends to be clouded an awful lot by what we want.

What’s actually best for us, though, is to become good stewards and obedient followers of God. That’s His design for us. That’s our purpose.

With all of that backstory told, if you begin just one verse before Jeremiah 29:11, in Jeremiah 29:10, the meaning is a little more powerful.

“For thus says the Lord: When seventy years are completed for Babylon, I will visit you, and I will fulfill to you my promise and bring you back to this place. For I know the plans I have for you, declares the Lord, plans for welfare and not for evil, to give you a future and a hope.”

The people of Israel are going to go through a lifetime of exile. At the end of 70 years it is unlikely that anyone hearing Jeremiah’s message in real time will still be alive or in any condition to return to the homeland. That’s why the earlier verses instructed the people to make a life – and a good one – in Babylon. But the Israelites as a people group would indeed return.

God’s plan for a future and a hope look a lot like current generations of Israelites making the best of their time of judgment – because God does have a plan for them, but nothing indicates it’s a plan they would choose for themselves.

And that hope for a return to the homeland? It will come to fruition in another lifetime.

And in the meantime, God has a lesson for His people to learn – and He spells it out in the verses following Jeremiah 29:11.

There’s a nice, neat happy ending. The people do return from exile. But it doesn’t happen in verse 11 and it won’t fit on a coffee mug. Following God doesn’t work that way. It’s more involved than coffee mug theology. But, dare we say,  it offers a greater reward than a cup of coffee.