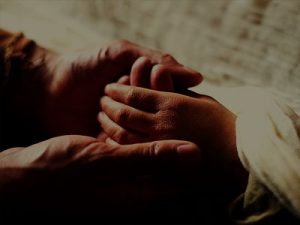 We see Jairus. He’s mature in his faith. He has to be – he is one of the rulers of the synagogue. His faith is not new, it’s mature and familiar. He’s known and respected by others because of his faith. He has a status in society. And in the midst of this life of privilege and notoriety, tragedy strikes. His little girl is horribly ill and is dying.

And we see a woman. She doesn’t appear to have much faith or much of anything. She is unnamed, which is a glimpse of how society saw her. She has no money. She has no status. She has no family with her. Even what little she may have had at some point earlier in her life was used trying to overcome the one thing she did have – a bleeding issue.

Jairus approaches Jesus boldly. He falls at Jesus’ feet reverently, but he is unreserved in asking for His intervention. Jairus wants Jesus to come to his home and lay hands on his little girl. These actions and requests tell us Jairus knows that Jesus is likely the promised Messiah. Knowing that we can only imagine the relief and the hope Jairus felt when Jesus agreed to go home with him. Jairus faith was in what Jesus could do.

On the way to the house, there was a distraction and a slowdown. It’s the moment when this woman appears on the scene. Her blood issue made her unclean, which meant she couldn’t go to the temple. She couldn’t interact with people. She certainly couldn’t touch people. It’s putting it mildly to suggest she wouldn’t be welcomed if she was spotted in a crowd.

But she has heard about Jesus. And her actions lead us to believe she knew at least a little bit about the scriptures. Malachi 4:2 tells that one is coming who will have healing in his wings. Wings was a term for the tassels in the hem of a garment. Almost like a monogram on today’s attire, these tassels, or wings, would identify the person wearing the garment. In the case of Jesus, these wings would provide healing, identifying Him as the Messiah.

With that in mind, the woman’s decision to approach Jesus in a crowd, from behind where she was less likely to be seen, and then to reach out and touch the hem of His garment suddenly seems much less arbitrary and much more intentional. And the Bible tells us her intentions were realized – it says she immediately felt her bleeding stop.

Immediately. That’s how the Lord sometimes chooses to heal us. Whether in physical healing or in healing a relationship or a situation. And it’s the healing we almost always hope for and prefer.

But the woman’s immediate healing caused Jairus to have to demonstrate the maturity of his faith, to trust in Jesus’ timing. Jairus might have wondered why and even been bothered when, Jesus stopped on the way to the house to ask who touched the hem of His garment. This was a huge crowd. Anyone could have touched the garment – even by accident. And if this was indeed the Son of God, wouldn’t He already know the answer to that? And why did it matter? Jairus may well have been trying to find a way to get things back on track and hurry on to the house. But Jesus wouldn’t be hurried. He stopped and engaged with the woman.

The woman was healed, and that seems like it should have been the end of her part in the day’s events. But Jesus called her out and required her to identify herself. He’s guiding her to what will become an example to all believers of giving testimony. And He’s showing her that her healing didn’t come from touching the garment, but from her faith and belief in the identity of the one who wore the garment. Jesus wants her to understand the source of her healing, and He wants all of us to understand the power and importance of our testimony. She recognized the hopelessness of her condition, she learned enough to know how to find healing, she sought the healing by stepping out in faith, and grace was given to her – very similar to the lost coming to saving faith in Jesus.

In the midst of the fuss over this woman and her immediate healing, word comes that Jairus’ daughter has died. Can you imagine the sudden hopelessness Jairus might have felt? He is on his way back to his house with Jesus, certain that Jesus will be able to heal her, only to experience this delay and the find out they are too late. Jesus is too late. From hope to hopelessness, with nowhere left to transfer his faith.

But Jesus. He reminds Jairus not to fear, only to believe. Jesus knows the power of resurrection, and He knows the pivotal role that will play in all of our testimonies. He isn’t rushed. He isn’t concerned. He isn’t surprised.

When Jesus (finally) gets to the girl, she is indeed dead. The others in the home are wailing. Their grief is real and palpable. But Jesus isn’t bothered – he knows to be absent from the body is to be present with Christ. He knows death has no power over a believer.

Jesus approaches the girl and says to her in Aramaic, not a formal and proper Hebrew phrase, but one from a common street language, “Little girl, arise.” A phrase that indicates endearment and familiarity. But also a command.

One day all believers will hear that from Jesus when we leave this body and are called to be present with Christ. The girl arose, from death to life, thanks to the power of the resurrection and the belief that Jesus is the Messiah. Her healing wasn’t immediate – and that delay caused tremendous pain for those who loved her. But then they saw something much more powerful than they would ever have imagined when Jesus called her back to life.

Jairus, a man of a mature faith, was forced by circumstances to trust in the timing of God’s grace, to rely on His sovereignty, and he saw the resurrection. His only other choice was to abandon his faith, which was his only hope, the only power strong enough to see his daughter healed.

God still heals today. Through the power of the resurrection, He heals the sick, He heals relationships, and He heals marriages. Sometimes those healings are immediate. Sometimes they happen more slowly on a timetable that might only make sense to the Lord. And sometimes healing is brought about through the ultimate healing of passing from this life into eternity with Christ. As different as each type of healing may seem, they have this in common: They happen because of our faith in Jesus, that He is who He says He is, and our trust that He will do what He says He will do.