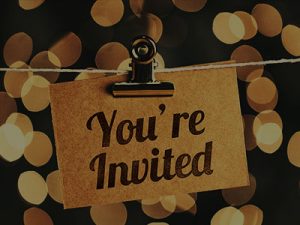 Invitations are funny things. When invitations are given, we all want to be included, even if we don’t want to fulfill the responsibilities associated with the invitation. When we don’t receive an invitation, we wonder why we weren’t included. And when we do receive the honor of an invitation, sometimes we find ourselves regretting the obligation.

Oddly enough, that scenario of accepting an invitation and then regretting the obligation shows up in Luke, chapter 14.

It was at a banquet. Jesus was there. He had been invited by Jewish leaders – probably in the hopes he would say or do something they could criticize, as the host and his friends were certainly not followers of Jesus.

Things had barely gotten started when Jesus was already healing people and teaching in parables. He imparted wisdom about who to invite to a banquet – not the people who were high society, but those who were marginalized – and He mentioned the resurrection of the righteous, an event in which Jewish men placed hope. When one of those at the table with him heard this, he said to Jesus, “Blessed is the one who will eat at the feast in the kingdom of God.”

Now, just as certain statements in our culture elicit a standard response, like “thank you,” and “you’re welcome,” their culture had an expected response for this statement. Usually, the response would be, “May we be counted among those who will sit with the renowned of the day.” That’s a rather presumptuous response and one that conveys an air of superiority. That was never Jesus’ style – He emphasized the value of humility. So, instead of the expected response, Jesus launches into another parable. This was typical of Jesus – and it’s still His style today. He shatters cultural norms, and He works outside the accepted frameworks.

You might be thinking this is where the invitation regret set in, but it wasn’t Jesus, or anyone in attendance at this feast, who embodied that regret. It was the subjects of his parable.

Jesus told of a man planning a great banquet. Many people had been invited. As was customary, the man’s servants had extended invitations and recorded responses. When preparations were nearly complete, the servants revisited those who had expressed their intent to attend to let them know it was time to come to the feast.

And displaying the worst manners, those who had planned to come, now made excuses – and rather poor ones – as to why they could no longer attend.

When the servant reported back to his master, the master was angry at the arrogant displays of poor etiquette. He insisted that his servant go out and invite the poor and the crippled off the street so the banquet table would be full. Turning cultural norms upside down, the master extends his invitation to those who were normally overlooked by society and who many believed to be cursed by God because of their lot in life. But the servant had already done that.

‘Sir,’ the servant said, ‘what you ordered has been done, but there is still room.’

And the master sent him out again, instructing his servant, ‘Go out to the roads and country lanes and compel them to come in so that my house will be full.  I tell you, not one of those who was invited will get a taste of my banquet.’

In this parable, the banquet is the Jewish concept of Heaven, the feast in the Kingdom of God. The master is God. Those who initially accepted the offer, but later declined to come – they are the ones who have heard the gospel, but they have let their blessings get in the way of life with Him. Their blessings are keeping them from worship. Their comforts are keeping them from a commitment to God.

We are the servant. We’re doing the business of inviting others to the Kingdom. And God sends us first to those nearby – those who are physically close, people whose paths cross ours on a regular basis. This might be other Christians who are without a place to belong or friends who don’t yet know Christ. And then he sends us further out, to strangers, to those whose lives aren’t like ours, to those whose paths wouldn’t naturally intersect ours, either because of physical distance or social chasms. God is aware that the feast has been prepared, that the price has been paid, and he wants to fill the banquet hall. In other words, Jesus’ sacrifice on the cross was sufficient for all, and God wants as many as possible to reap the benefit of it. And He sent us to invite them.

If we profess Christ, we have accepted His invitation. And now, He asks us to continue extending that invitation to others. All the others. It’s the best invitation there is, and if we accept what He’s offering, it’s an invitation we can enjoy with no regrets.